Yesterday I met Bornface Omallah at one of the petrol stations close to the main market in Kisumu, Kenya. Each of us took one of the bicycle taxis (widespread in Kisumu) through the main market. There were stands aligning all the streets and people walking around bargaining and arguing. We went further and further out of the main areas and as we reached the outskirts we arrived at Bornface’s stall, a print and computer service shop. 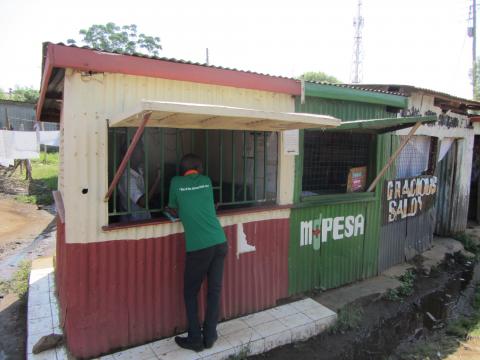 Bornface’s printing service is the stall on the left.

Bornface tells me that the current location was not the original one. In the beginning of the year they were situated much closer to the center of the market.  However, the landowner of that stall decided to upgrade the stalls (building small places out of cement rather than using wood and iron sheets), which led to a doubling of the rent! Bornface could not accept this and decided to move out. His current location is, luckily, close to a school, which is where most of his customers come from.

He has one person employed, called Fred, but rather than calling him an employee he sees Fred as his partner and hopes that as the business grows Fred help him to make the business more profitable and diverse.

Bornface is also preparing to open a new stall in another part of the market. This stall is made out of cement and makes the business look very professional. I personally met the landowner and he assured me that by the end of the week Bornface would be able to move in and open his shop. This enables Bornface to have two shops simultaneously which would give him a much better income. He has already contacted a lady that would be willing to work for him and could then be stationed in the new shop.

On a typical day Bornface walks around and tries to find jobs for his print shop, while Fred is stationed in the shop itself. Being in the business for quite a while now and knowing many people and organisations in Kisumu makes it increasingly easy for Bornface to find jobs for his business. Bornface’s future looks bright. His business seems to be prospering and his income gradually increasing.

However, up until recently that was not the case. Due to mismanagement at his former workplace, a microfinance company, many people had to be laid off, Bornface unfortunately being one of them. For a prolonged period he was living from hand to mouth, barely being able to provide for himself, his wife and his three children. “It really brings you down when you cannot provide well for your own family. You feel guilty and sad, and try every little thing to improve the situation,” he tells me with a sad look on his face.

However, Bornface had heard of Kiva and desperately looking for money he began searching for microcredit companies online. Zidisha came up, and intrigued by the Swahili name he entered, registered himself, and quickly sent out a loan proposal. After only three days his loan was raised, but only when he received an SMS saying that the money had been transferred to his account did he believe it was true.

Since then things have improved dramatically. With his first loan of $93 he purchased a printer. With the second of $283 he managed to buy a combined printer / scanner and a minicopier, which enables him to offer a range of different services: typesetting of student theses and contracting proposals, and printing of business cards, brochures, event programs and even wedding cards.

Profit has increased dramatically, and Bornface can pay school fees for his children as well as his younger brother’s high school tuition.  With a big smile he tells me, “You know, it’s just an incredible feeling when you can offer your children meat once or twice a week, when you know you will be able to pay your rent and can ensure that your children attend school. It just makes the day so much brighter!” I didn’t say anything, I just smiled, but to myself I thought, “I cannot claim to know that feeling, but it must be absolutely wonderful.”

You may view Bornface’s story in his own words in his Zidisha profile page.