Artists are among the most generous of people. Perhaps inherent in the appreciation of creativity comes a deep, underlying love of humanity and our Earth.

I was fortunate to visit the famous dance studio of Aloysius J in Jakarta, Indonesia.

The studio consisted of a large mirrored practice room, with a door opening into a large courtyard in back.  Dance props were tucked into the corners, and hundreds of well-worn shoes were lined up neatly under an impressive display of trophies.  The entire place was spotlessly clean, and every bit of wall space was covered with motivational posters.

At just 25 years old, Aloysius has a legacy that would make a mid-career professional proud.  Born with an extraordinary passion for the performing arts, Aloysius never missed an opportunity to practice dance as a teenager, and was eventually awarded a scholarship to study modern dance in Singapore.  Upon his return to Indonesia, he was asked to serve as a judge in a dance competition.  Not content to merely judge the participants, he shared tips for improvement.  Some of them asked him to teach them more, and before he knew it, Aloysius had his first students.

His teaching must have been good, because as word spread, more and more students came.  Aloysius soon had to rent a room to house their practice sessions.  Most of them were high school students from low-income neighborhoods in Jakarta.  The value they gained went far beyond dancing skills, Aloysius explained.  “At a young age, not everyone is able to understand themselves and a lot of changes that might happened in their behaviors and perceptions. Some more if they don’t build a good relationship with their parents and family. So through those values in dance, I always encourage them and lead them to know what they want and direct their potentials to be used in a right way, in this case is doing positive activities through rehearsals and competitions.”

Unusually for a dance school, Aloysius does not charge his students any tuition fee.  Aloysius himself is a volunteer, and the school’s other costs are funded almost entirely with prize money from dance competitions.  The students travel throughout Indonesia to compete, entering 10-12 competitions every month, and bringing home prize money an incredible 90% of the time.

Just some of the trophies the school has won

When I asked Aloysius why he did not target a higher-income student demographic and charge tuition, as performing arts instructors normally do, he said, “As an artist there is an urge inside myself to share.”  He explained that teaching the students who most needed it, for free, was not only a way to give back to the arts, but also made his own art richer and deeper.

When his school grew beyond 100 students, Aloysius began searching for a proper studio location. He soon found an ideal place, but finances were a barrier: the studio required a year’s worth of rent to be paid in advance.  There were plenty of banks in Indonesia, he explained, but they invariably required collateral assets – something that Aloysius lacked.  He found Zidisha while Googling for loans without collateral, and decided to give it a try.

Previous loans were used to purchase build props, buy dancing shoes, acquire loudspeakers so the school no longer needed to use cell phones to play music during practice, and outdoor lights to enable practicing after dark.  The most recent loan, of $682, will go toward rental of the new studio.

“Teaching youngsters and motivating them through dancing is my passion,” Aloysius explained.  “Because dancing has changed my life so much. Not so many people can appreciate it because they just think that dance is all about performing, but beyond that, there are hard works, discipline, positive mindset, persistence, determination and struggles involved that we have been going through and that shapes our personalities.”

Interested in seeing some of the students’ dance performances?  Aloysius has kindly posted some videos of them here: http://www.dailymotion.com/video/x2fahea_video-2_webcam 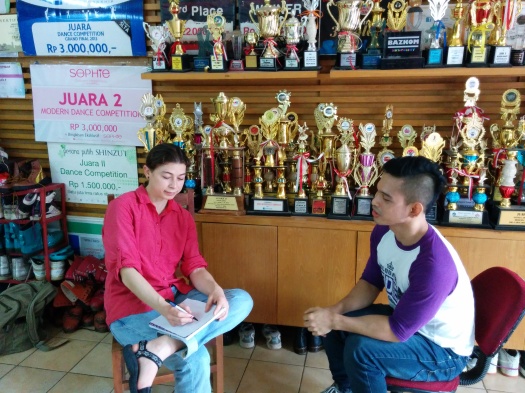 One thought on ““Have a generous heart””