Duncan Nduati started out as a normal college student with a certain knack for business. After growing up in Thika town in Kenya, he continued his education at Jomokenyatta University where he studied Math and Computer Science. He was determined to go into business during his time at university so he started by saving the loan that was offered to him by the government for school fees. After a year, he began selling airtime cards and by the end of his second year he had saved enough for a small shop where he sold snacks and stationary.

After another year went by, he was ready for his next business venture, a clothing shop in Thika town. However, after 6 months in business, the business was broken into and all of his stock was stolen, totaling Ksh 0.5M. While many people might not have the courage to try again after a situation like this, Duncan kept moving forward. As his college studies came to a close, he started an IT and computer maintenance business during his final year of university in 2012 and he continues to run the business.

Today, Duncan’s business is registered as Thikatel computers where he sells computers, does repairs, and offers other related IT services. When he discovered Zidisha he had been running his business for almost 2.5 years. When he started, he began with services such as, operating system repairs, computer hardware repairs, and networking and data recovery. Now he has  grown to also include desktop computers and laptops, as well as computer accessories.

He mentioned that he chose this particular business because of his interest in computer hardware. While he knew that the business would require a high degree of capital, he also knew that he had a ready market of college students looking for his products and services. With his profits he is able to pay his rent and support his family.

In January 2015, Duncan obtained his first Zidisha funded loan of $100. With this loan he was prepared to purchase mouse devices, keyboards, power cords, and flash disks. In addition, he was ready to find a new location for his business. His current shop was located on the second floor of a building and he hoped to improve his location by moving to the ground level. However, he also knew that this move would result in a significant increase in his rent each month.

Always full of new ideas, by April Duncan was ready for his next move. With his next Zidisha loan of $230 he purchased phone memory cards, and more flash disks and hard disks. With more stock on hand, Duncan started a new marketing initiative in order to sell his products in wholesale and bulk on college campuses and nearby shops. He also had the idea to employ a few sales persons. He hoped that this would allow him to expand and would provide employment opportunities for members of his community. 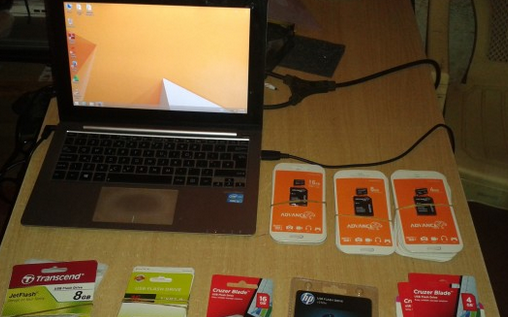 In addition to the computer products and repair services that he offered, he determined that he needed to offer more phone and computer accessory items. With this in mind, he requested his next loan of $332 in July 2015 to increase his stock of these items. He purchased in bulk with the intention to then resell to retailers. During this time Duncan was also able to open another small phone shop near his home which is wife is now running.

Duncan is certainly a marketer at heart, and with his next loan of $332 in October, he set out to print marketing materials and hoped to hire 2 people to distribute the leaflets throughout the town and in offices. He used the remainder of the loan to increase his stock of memory cards and flash disks. Duncan accompanied this loan request with a kind note to his lenders saying, ‘I would like to thank the lenders for the continued support.’

By February 2016, Duncan felt it was important to increase his stock of computers. He obtained a Zidisha funded loan of $494 and set out to purchase 20 desktop computers as well as 20 monitors. Included in this loan, were other accessories such as flash disks. Business was going so well for Duncan that by June, he was ready to buy 15 more used desktop computers for a total of $745. Shortly thereafter in September, he was ready for his largest loan yet. At $1,116, he hoped to purchase 11 used Dell laptop computers, hoping to make a profit of $50 on each computer. Duncan shared that he was excited by how this loan would positively impact both his business and family. He ended the year in December 2016 with an update on his discussion page which read, ‘I would like to thank my lenders for the continued support. The business is doing well and am looking forward for a great year and wish a safe festive season.’

On April 17, 2017 Duncan shared this inspiring update with his lenders, ‘Am so grateful for the previous loans. My business has grown tremendously and marketing has become easy. I hope to continue increasing and growing the business with your help. Thanks lenders for your unwavering support and financial help.’ Duncan’s most recent Zidisha funded loan was a request for $1,688 in April 2017. Due to his use of advertising, he found himself in need of additional stock. With this loan he planned to purchase 10 used laptop computers at $120 each as well as 10 used desktop computers at $50 each. He chose used computers because he found through experience that they sold more easily due to affordability and ease of use. He anticipated that this would result in a weekly income of $100.

Recently, in June 2017, Duncan shared on his discussion page the significance and benefit of the Zidisha/borrower relationship as he shares, “On many occasions it is never easy, the business world is harsh, however, with a helping hand and a friend like the Zidisha team it’s promising and hope filled when you have a team that just trusts you beyond all boundaries. Thanks Zidisha team for offering the much needed help. I am doing better everyday.’

Did Duncan’s story resonate with you? If so, check out our Lend page where you can find other amazing stories of Zidisha business owners.