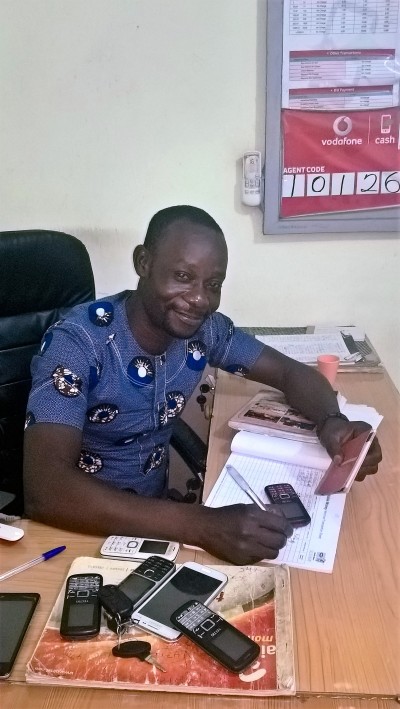 Abdul-Karim Mohammed was born in Gumbihini, a suburb of Tamale in the Northern Region of Ghana, West Africa. He is the eldest of seven children and grew up in a poor farming family. As a child, he would follow his parents to the farm to help with the workload. His father did not want him to attend school, as he wanted him to help with the farm. However, Abdul was persistent and shares, ‘I cried ceaselessly and he registered my name.’

He was enrolled in Krabonso District Assembly Primary School and continued with its Junior High School where he was named the Senior Prefect (SP). Even as a busy student, he spent his time after school working hard on the farm. Later on he attended Vitting Senior High School where he studied agricultural science and then he continued to University for Development Studies with a specialization in environment and resource development.

He notes that life as a university student was a challenge in terms of finding the money to buy books and pay the class fees. To make some extra money, he began selling credit cards to his fellow students and offered mobile money transactions including: MTN mobile money, Airtel money, Tigo cash, and Vodafone cash. He has been able to grow this business as it is now a market that is doing well in Ghana.

To explain how this works, Abdul shares, ‘If someone wants to withdraw or remove money from his or her mobile wallet, the person pays a commission of 1% of any amount withdrawn.This commission is charged automatically by the network providers. Depositing money into ones wallet also attracts a charge which is paid to us at the end of the month. Everyday, people transact mobile money and also make calls to friends, business partners, relatives and loved ones both near and far, hence the need for this business. This business helps the community members to have easy access to their money.’

In terms of revenue, he uses 20% on home improvements and for paying school fees for his children. Another 10% helps to support the local orphanage, while 40% is used to reinvest in his business. The remaining 30% is used to repay his loans. He also pays a watchman to watch his shop at night to prevent theft.

So far, Abdul has secured four Zidisha loans, his first, was in November in 2016 for $404. This first loan was used to increase his overall capital. His next loan of $567 in March of 2017 was used to purchase credit cards and mobile money. He shares, ‘The community people will no longer travel to far places to buy credit or do mobile money.’

A few months later, Abdul raised a third loan of $861 in August 2017. With this loan he purchased two new mobile phones. One for mobile money transactions and the other for units transfer. The remainder of the loan was used to purchase mobile money and allocated to purchasing credit cards for the available networks in his business area.

Most recently, he secured a fourth loan of $1,448 in December of 2017. He was able to make some big changes to his business including: purchasing two new printers, new printing paper, more mobile money, and credit cards. He was also able to use a piece of the loan to buy food for the Tamale children’s home in his community.

He enthusiastically shares, ‘This judicious use of the loan would be beneficial to the community and myself in several ways; people within my locality will no longer have to walk to far distance to access all these services I am offering. This will reduce their cost of transportation and stress. On my part, I will earn a lot of profit to grow my business.This will enable me to pay for my loan and also solve my family issues and make more savings.With this loan, I expect my profit to increase by 50% that is from 333.54 to $501 per month.’

Due to the example that he has set, his eldest child would also like to be an entrepreneur and his second would love to be an engineer. When he has the time, Abdul also loves reading books and playing football.

On December 16, 2017, Abdul was excited to relay this message to his lenders, ‘I thank the lenders for their usual support. They have really improved my life and my family and other people such as the children home. God will bless them abundantly and grant them all their heart desires. I promise to be very committed to them with regards to the repayment of the loan and the growth of Zidisha as a whole. Thank you very much for everything.’

Would you like to support another entrepreneur who is changing their families and communities? Head on over to our Lend page to read about our other incredible Zidisha change makers.