Two more updates from Achintya, our intern in Kenya:

Edward Waithaka
On 8th Feb I went to meet Edward Waithaka at his home and Shamba (farm). Edward works as a watchman in Mugaa Secondary School where I was putting up. With his first Zidisha loan he bought a donkey. I asked him what the donkey’s name was and he said “Geneva”. I said “I’m sorry what?” He replied “Geneva, like the one in Europe”. Edward did not complete his schooling and has studied till form one.

During the 2007-08 post-election violence Edward had to sell most of his flock of sheep and goats at very low prices. He, like most people in the village, sent his wife and children away during the conflict. The Zidisha loan helped him get back on his feet. He uses the donkey to fetch water for his Shamba and his family. He also invested part of the loan to build the roof of his house.

With the second loan he bought a goat, which later gave birth to a little baby goat (called Toto, which means ‘a baby’). Edward has 11 children, 6 of whom stay with him. The youngest is 9 months old. The milk from the goat is just sufficient for his family but he intends to buy a cow with his next loan. He expects that by then he’d have 4 goats and sufficient milk to sell in the market. I learnt from him that goat’s milk is costlier than cow’s in Kenya. I remember reading that Gandhi called goat the “poor man’s cow”. Apparently not so in Kenya. 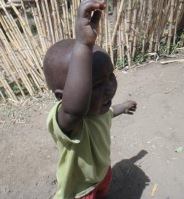 Edward works as a night watchman in the school and he was utterly fascinated by my torch, which does not need a battery but can be charged by rotating a small lever on its side. He told me that he spends on 4 batteries every month for his torch so I have promised to give him my torch before I left Kenya.
Ironically Geneva, as if realizing I was from Zidisha, was very happy to see me (he overturned like a beetle and gave himself a nice rub in the mud right in front of me) but Edward’s little son was not (he bawled and ran away from me)- pictures of both attached. I found Edward to be a very simple hearted and genuine person, free from any guile. I’d love to see him employ his Zidisha funds in gainful uses and improve his lot.
Read more about Edward here

James Nuthu Mwangi Yesterday I went to meet James Nuthu Mwangi at his business premises. James runs a cleaning business, specializing in cleaning mattresses. His business is called ‘The Mattress Doctor’. He and his cousin, who is an insurance agent, share the premises to cut down on the rent. James found Zidisha on his own. He went to a bank for a loan but the bank asked for a guarantor, a running business with stable profits and an interest rate of 13% to 15%. He then searched online and found a famous lending organization that referred him to a local micro-finance organization (which the famous lending organization funded). This local organization asked him to open an account with them and other complicated formalities and demanded a MONTHLY interest rate of 2% for their loans. In simple interest terms, that totals to an interest rate of more than 26% per year. With the next loan James wants to buy a bigger vacuum cleaner because the one he has right now is, though good for cleaning mattresses and sofas, not very useful for general cleaning. James persevered in his search still, and he found Zidisha.

Today James is one of the strongest advocates of Zidisha and volunteers for us. He is also the de-facto coordinator of Zidisha activities in Nairobi. James used his first Zidisha loan to buy a steam machine and to design and print flyers that he used for marketing his business. When I asked him how he learnt to clean, he said “through the internet!” and proceeded to show me a bundle of downloaded literature on cleaning. When one of my professors said that Internet would democratize information (this was in 1999-2000), I did not expect it to manifest like this. After finishing school James did a course in programming and later used these skills to design his business website which I found to be quite interesting, informative and easy to maneuver.
Bright green is a color that Zidisha clients seem to prefer. The bicycle that James uses to commute to nearby areas for his business is the same bright green color as the pickup truck of another client I met recently. His bike is also the first geared bicycle I’ve seen in Kenya (the gears don’t work anymore though).
Check out James’ Zidisha page to learn more